Hi all!
When i create my wmfod.mif image, whether using the tournier or dhollander algorithm, I get these bright regions at the cortical ribbon, which do not occur consistently in all subjects. I’ve tried tweaking my pipeline to avoid use of dwibiascorrect and other things, but they’re still persisting. I’m not progressing to tckgen creation for each subject, and wondering if I should be worried about these, and if they could through off my results?
Thanks in advance! 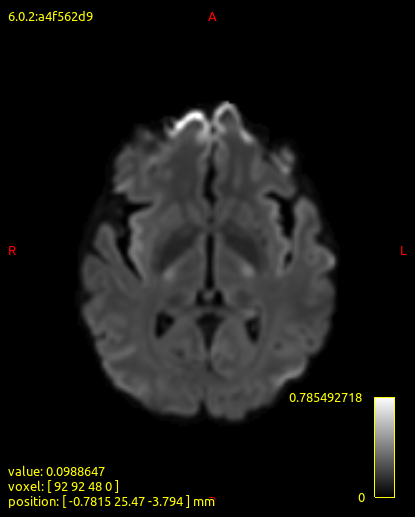 I get these bright regions at the cortical ribbon

That’s the consequence of using single-tissue CSD (following dwi2response tournier) or 2-tissue CSD (with the WM and CSF responses from dwi2response dhollander) on low b-value data. What you’re seeing is GM-like tissue (well, actual cortical GM) being fitted mostly by the WM compartment (and for a very small fraction also by the CSF compartment). At low b-values, this produces relatively more signal than WM-like tissue, which is the bright cortical ribbon you’re seeing.

Separately, the super-bright region at the front of the brain in your screenshot in particular, that’s further emphasised by EPI distortions.

which do not occur consistently in all subjects.

That can happen additionally when using 2-tissue CSD + mtnormalise at low b-values; I’ve observed this myself in some experiments, so it’s expected, yes. This in addition to other challenges with interpretation, depending on the scenario, that I hinted at in this post.

Modelling GM-like tissue in its own separate GM-like compartment, which will deal with the problem you’re seeing here, is for single-shell (and low b-value) data only possible using single-shell 3-tissue CSD (SS3T-CSD).

Global intensity normalization - On dwi or on FOD?