Why most streamlines are located at the touched area when tracking for 2 neighbour area?

When I check the result, I found most connections are located at the touched area for 2 neighbor areas.

Does anyone know what causes this result or anyone else encountered such a situation?

Thank you so much in advance.

I’m not sure I understand your issue. Maybe you could illustrate with some screenshots?

Thank you very much for your response.
This picture shows the connection between left primary motor cortex (cold) and left primary somatosensory cortex (gray). From the visualization, densest connections are located in the boundary between two areas. 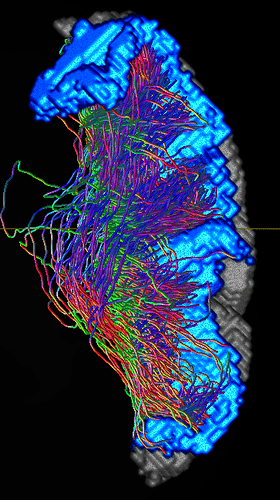 M1_S1365×650 294 KB
I also changed the parameters to generate the connections. The results are similar. Do you think this is reasonable?

Thank you in advance.

It’s slightly difficult to see exactly what’s going on there since one region is almost entirely hidden behind the other.

An alternative way to think about this though:

If two grey matter regions are right next to one another, why would the brain generate a large number of long-range connections between them? The latter would require more material resources, more metabolic resources, and would result in elevated transmission delays.

This is all to say: if there’s a discrepancy between what is expected, and the result that is coming out of your data, that’s something we can consider; but at the moment, it’s not clear whether or not there is actually any problem.

Thank you very much for your reply. Recently I checked some anatomical studies. As you said, the densest connection is sort of located in the boundary for M1 and S1 area.
Thank you so much and sorry for the late reply.