when I load a tensor image from ODF display tool, it’s ok to see the tensor in 2D, but if I choose “volume render” of “View”， I just see a solid brain, then I open the View options panel, choose “Hide main image”, nothing can be seen. Is MRtrix can not view ODF in 3d? 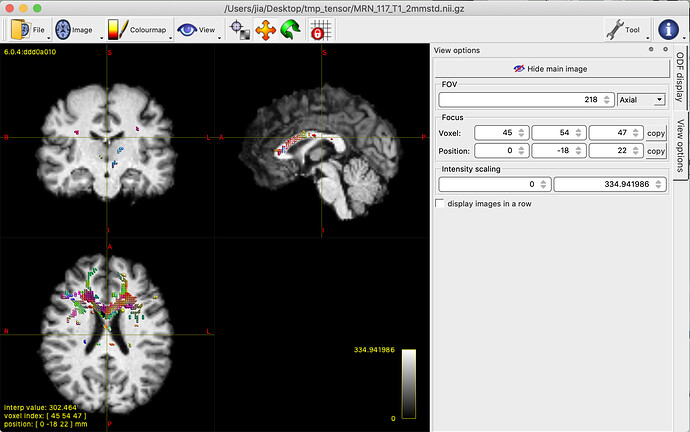 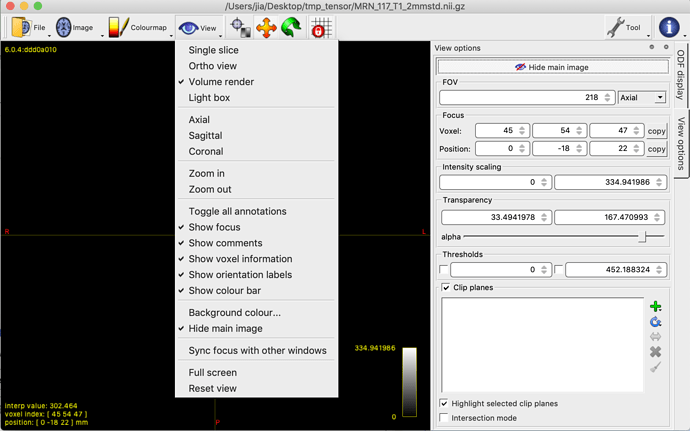 Yes, that’s not currently supported. I considered adding support for this at the time, but I couldn’t think of a way to implement it that made sense, or added anything to the simpler 2D version. It wouldn’t normally make any sense to render all visible ODFs, since that would immediately obscure anything else – there’s too many of them. We could restrict the render to just the ODFs at the surfaces of the clip planes, but that’s actually quite complex to do well, and I couldn’t see that it added much value over and above the single-slice modes. So I decided it was simplest not to try…

I note that in your case, you have very few ODFs to display, and so it might actually make sense to render all the ODFs here – but this is by no means a typical case. However, implementing support for this would require quite a bit of work, and none of us will have the time to look into this for quite some time, unfortunately.

Note that the one feature that does work in volume render mode is the ‘inspect ODF at focus feature’, which allows you to look at the ODF at the position of the crosshairs in a separate window. But I appreciate this is not necessarily what you’re after either…

If the goal is to visualise spatial and orientation patterns of the ODFs, a workaround is to generate tractogram with appropriate parameters such as reduced minimum tract length and display that in 3D.