I have DWI acquired in AP and PA phase encoding directions. I performed the bias correction using “dwibiascorrect ants” on both the scans separately. I subtracted the unbiased image from the biased imaged to visualise the residual bias field for Quality Assurance purpose. I have also attached the residual bias field maps below. Based on the visual inspection i have the following questions 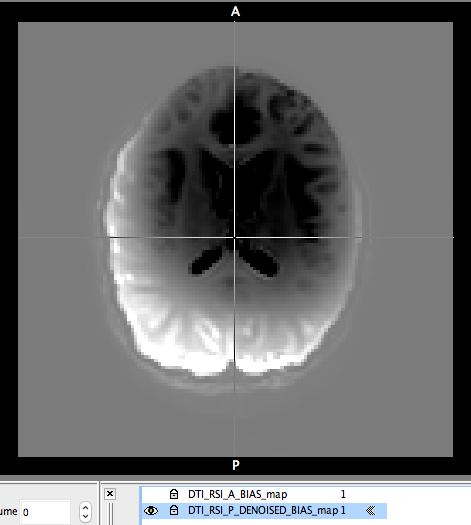 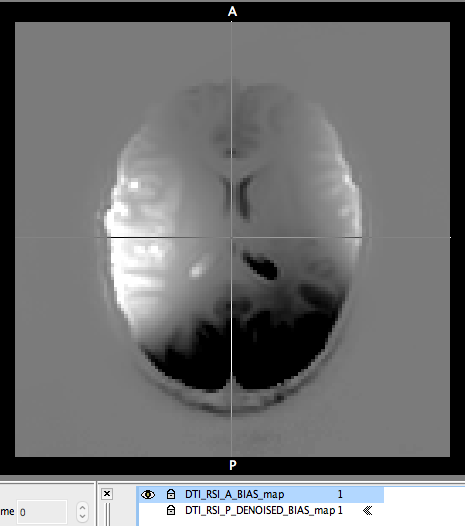 Given that the bias field estimated within dwibiascorrect ants by N4BiasFieldCorrection is spatially smooth by construction, and all dwibiascorrection ants does is a division operation of the DWI data against such, I unfortunately have no choice but to attribute the anatomical contrast present in those images to … user error

Normally I’d ask for the exact sequence of commands that were used to generate the images shown; in this case I’m hoping that, by going through the process of trying to produce such in order to prove me wrong, you’ll figure out what’s gone wrong. You can also use the -bias option for dwibiascorrect ants to export the estimated bias field directly, which might help to hone in on the discrepancy.

We can see that the residual bias field maps in AP and PA directions is not the same. Would it make more sense (in this case) to perform bias correction before eddy correction?

I’d want to both resolve the first point, and interrogate potential sources of the discrepancy, first before making a decision on the processing pipeline.

Assuming that you’ve not changed the head coil between the two phase encoding directions, potential sources of such variation in bias field are:

Since none of these are of particularly high likelihood, I would encourage you to interrogate further.

In the residual bias field map is not completely smooth. I can still see some anatomical structure. Is this how it is supposed to be?

As Rob mentions, the bias field is a multiplicative factor. The subtraction will have anatomical structure because what you need to do to recover the field is to take the ratio of the images (i.e. mrcalc pre.mif post.mif -div field.mif)

We can see that the residual bias field maps in AP and PA directions is not the same.

Are you sure you’ve done the subtraction the same way around in both cases? The contrast looks almost exactly inverted, there’s a chance that might the issue here…

As Rob mentions, the bias field is a multiplicative factor. The subtraction will have anatomical structure

Thank you very much for your support!

Just to be sure that i see this in all the scanned subjects, I have calculated the bias field maps using the ratio of the images (i.e. mrcalc pre.mif post.mif -div field.mif ) in another subject. And now i see the smooth bias field (attached the AP and PA bias field maps below). But, i still see that the bias field is not identical in the DWI’s acquired in AP (one b=0; 30 diffusion weighted volumes) and PA (one b=0; 30 diffusion weighted volumes) phase encoding directions. 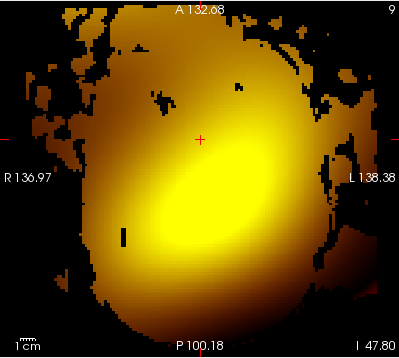 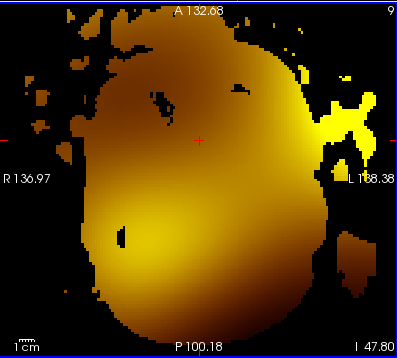 While it’s slightly concerning, it’s also not entirely surprising given that those fields are being estimated from solitary b=0 volumes in each case. So we don’t know whether that variation is due to subject motion or due to the ill-posedness of bias field estimation from b=0 data alone, particularly without any averaging.

You would need to interrogate this further, as the advice would change depending on the source of the variability: if inter-sequence subject motion genuinely leads to different bias fields (once the data are mutually aligned), then correcting them individually before combining would be preferable; whereas if this is variability in outcomes of the N4 method given the data provided to it, then the field estimated from the combined data may be more reliable than those estimated from the individual b=0 volumes, and therefore correcting afterwards may be preferable.

(More generally, it would be preferable if bias field estimation and correction were included in a large iterative loop correcting all unwanted DWI effects, and using more than just the b=0 data when possible; but we can only do what we can with the tools we have right now…)

If we assume that subject movement (among others) has influenced the bias field, would it be appropriate to retrospectively correct for head motion parameters (as nuisance regressors in the design_matrix.txt ) when performing fixelcfestats?

I also want to chat briefly about the effect of masking as observed in the data you’ve presented: