Dwidenosie on complex volumes, will the phase discontinuity in z direction cause any trouble?

I’m writing to ask if I’m running dwidenoise on complex data to achieve a better result for lower SNR. Will the phase discontinuity in the slice direction cause any trouble (since the reconstruction is slice-by-slice)?

Please see the ortho-view images displayed in the complex option of the mrview. 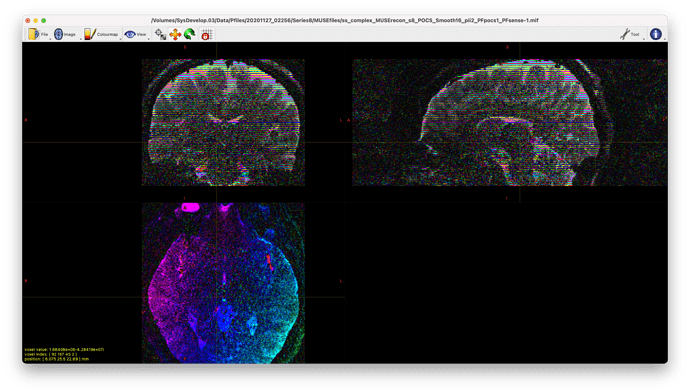 That’s an interesting question! @dchristiaens & I have discussed this in the past, I’m not sure we’ve come to a consensus as to whether this matters or not…I have a feeling it might not make any difference, but I would definitely need to double-check first!

I was having this little doubt because of the following observation:

In a multi-shot (num_shot = 4) acquisition: I think I could try the following two options:

I was hoping the second option could give me a better FA map compared to the first option because dwidenoise input having more volumes and complex input, but it turned out to be not the case. That’s why I think I might have missed something during this process.

I have another question, hope you don’t mind. Will the image after dwidenoise generate a more accurate phase map compared to the phase map from the pre-denoise image in theory?

Will the phase discontinuity in the slice direction cause any trouble (since the reconstruction is slice-by-slice)?

Very much not the local expert on this, but I would think that any genuine structure in slice-wise phase maps within the size of the sliding window would be well and truly above the MP threshold. We’d probably need to see clear examples of reasonable-looking phase ramps being destroyed by dwidenoise to warrant concern.

The answer here may depend on how it is that you are reconstructing images from individual shots. If, from an under-sampled k-space per shot, you reconstruct a full-resolution image from each shot, then this may be violating dwidenoise's requirement of independent voxel intensity samples, which is the same requirement that is violated if attempting to run dwidenoise that has undergone image interpolation.

Will the image after dwidenoise generate a more accurate phase map compared to the phase map from the pre-denoise image in theory?

Assuming there’s no issue regarding the first question, then one would presumably expect so. The denoising is applied to the real & complex components, not the phase itself, but if each of those has structure-less noise removed, then one would expect less structure-less noise in the derivative phase image. Whether or not one would deem this to be more “accurate” as opposed to “precise” is maybe up for debate though.