I’m trying to compute FBA, and would appreciate your advice on statistical matrices construction. We have three groups: typical population (T), disease population (D), and disease-related (Dr) population. My first version of design matrix is this:

Where the first column is intercept, the second is T group, the third is D group, and the fourth is Dr group. N lines for N subjects.
The contrast matrix for me to see the difference between groups:

Now comes the puzzle. Since fixelcfestats only accepts a single contrast, will I need to run the analysis twice? First, I will run (1) and (2) (supplying (1) and requesting -negative output as well), and then run (3) and (4) in the same manner? My question is whether this would be a correct way of running this type of analysis.

This design matrix may misbehave as it is rank-deficient: the sum of columns 2-4 is equivalent to column 1, and therefore there are an infinite number of solutions for the beta values. While the GLM code is designed to still work in such circumstances, and due to the nature of your intended contrasts it shouldn’t actually have an effect on your t-values, it’s nevertheless avoided as best practise.

You could simply omit the first column entirely:

(for two subjects in each group)

Moreover, while you have three groups in your experiment, none of your hypotheses actually require all three groups to be present in the model at the same time; and fixelcfestats can’t (currently) test more than one hypothesis at a time. So you could simply construct two separate design matrices: One for comparing T and D, one for comparing T and Dr; then run fixelcfestats separately for each.

Thank you! That’s what I ended up doing.

Watched a bunch of Jeanette Mumford’s brain stats videos, and read a lot of GLM theory…

If you don’t mind, can I piggyback on here with a couple of questions? First, I’m a little pained by the FWE correction. Is there an option to use FDR instead?

Second, may be a little silly question, but being new to these processes I’m trying to gain a thorough understanding of it all.

I ran a simple correlation using a single group to see if some behavioral measures associate with WM “integrity” (for lack of a better word…). The results look interesting, but I could not wrap my head around what the absolute effect output would mean in this scenario. I “discovered” it’s identical to my beta of interest. Am I understanding it right that it just is designed to create this output?

Watched a bunch of Jeanette Mumford’s brain stats videos, and read a lot of GLM theory

I’m a little pained by the FWE correction. Is there an option to use FDR instead?

Currently no. I suppose it would technically be possible, but would require someone motivated enough to do it.

… I could not wrap my head around what the absolute effect output would mean in this scenario. I “discovered” it’s identical to my beta of interest. Am I understanding it right that it just is designed to create this output?

The “absolute effect” is the inner product of the beta values with the contrast vector. So if your contrast is a single “1” and zeroes in all other columns, then yes it is identical to the beta value of that column. In certain circumstances it can be used in certain calculations and/or have a certain interpretation, but it’s best understood from the underlying fundamental mathematics.

Thanks for detailed response!

Here is the youtube channel which is very helpful in my statistical inquiries. https://www.youtube.com/channel/UCZ7gF0zm35FwrFpDND6DWeA

I hope people find it useful.

Hi,Olga
I’m glad to see your post when I’m wondering how to set design_matrix and Contrast_matrix.
So,in the end,because of my poor comprehension ability, I didn’t know how to set design_matrix and Contrast – matrix.Can you give me some advices?
Or,a concrete example is given(Group A:001_control,002_control,003_control;Group B:001_patient,002_patient,003_patient),how to set this example’s two matrix?
Last question, How to implement FWE correction?

From your brief description it looks like you’re doing just a basic two-group difference?

This is not something that you yourself need to “implement”; the fixelcfestats command performs FWE correction and provides you with FWE-corrected p-values.

Hi Rob,
I’m glad you can answer my question.
Yes,I’m looking at FIXEL changes in the same group of patients at different points in time,so I use paired T-test.At the samt time,I am also examining FIXEL differences between this patient group and the healthy group (inconsistencies in number),so I use unpaired T-test.

I’m looking at FIXEL changes in the same group of patients at different points in time,so I use paired T-test.At the same time,I am also examining FIXEL differences between this patient group and the healthy group (inconsistencies in number),so I use unpaired T-test.

These are two very different experiments; and it’s not just the design matrix that differs between the two, but also the nature of the model errors that determine how shuffling should be done. So if you’re still unsure how your GLM should be set up across multiple experiments, make sure that you describe all such experiments.

What you’re looking at there is purely the time at which the file is first created on the filesystem, which is not guaranteed to be in the same order as that in which they are computed, depending on exactly how the code is written. In this case, you can indeed see in the code that uncorrected_pvalue.mif is written after fwe_1mpvalue.mif.

However I’m going to infer from your question that you were in fact expecting the former to be written a long time before the former, since it “doesn’t require FWE correction” and therefore should have been calculated and written a long time before the FWE-corrected p-values. However the uncorrected p-values still require computing all shuffles of the data. The uncorrected p-value is the fraction of shuffles for which the enhanced test statistic in that fixel was greater than that in the unshuffled data; whilst this may be independent of all other fixels (and hence “uncorrected”), it still requires performing all shuffles. Hence why they’re written to the filesystem at approximately the same time.

So if you’re still unsure how your GLM should be set up across multiple experiments, make sure that you describe all such experiments.

I’m sorry to bother you with these simple questions.Thank you very much for your kindness to answer my questions.
OK,I will describe my experimental setup in detail.
I have data on 37 patients at four different points in time.Like:

and I have 15 healthy controls data at basedline.
I want to compare 37 patients pre-therapy data and 15 controls data(I use unpaired two-sample T-test).What’s more,I want to compare the 37 patients at each point in time, and I want to do a pairwise comparison(like,pre-therapy vs post-treatment,post-treatment vs 3 months later…6 conditions in total) so I am going to do the paired two-sample T-test 6 times.
Take an example of a situation:(pre-therapy vs post-treatment)(I just take two patients’ data at two time as example,like:patient1:data1.1 data1.2 ; patient2:data2.1 data2.2 )(FD comparision)

I know that with so little data, the results are not statistically significant.I just want to familiarize myself with the steps of the analysis process and the setup of the design and contrast matrix.

So,I get these results:

I know what the uncorrected_pval.mif means and the fwe_1mpvalue.mif represents the FWE corrected P value.Actually,These two P values are (1-P).

And I mrview wmfod_template.mif and use fixel plot to overlay fwe_1mpvalue.mif.
I have some questions about this:
1.The image 1 shows the results I got using the MRView command directly.
2.Do files with “Colour by”, “Thersholds” and “Scale by” boxes have to be the same?(Like image 2)
Should the minimum threshold of 0.95 be set this way?(Like image 2) 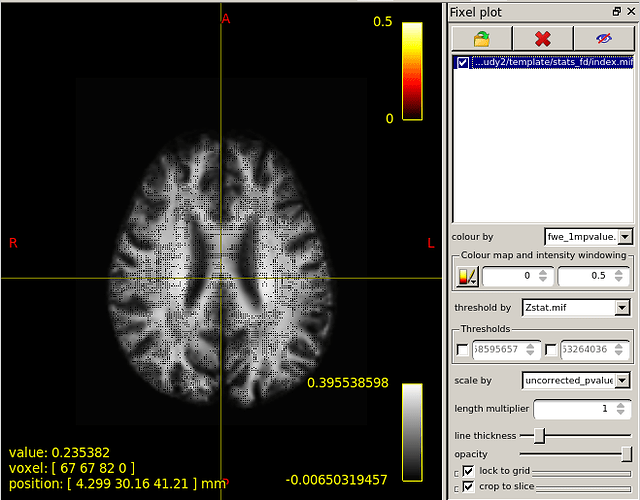 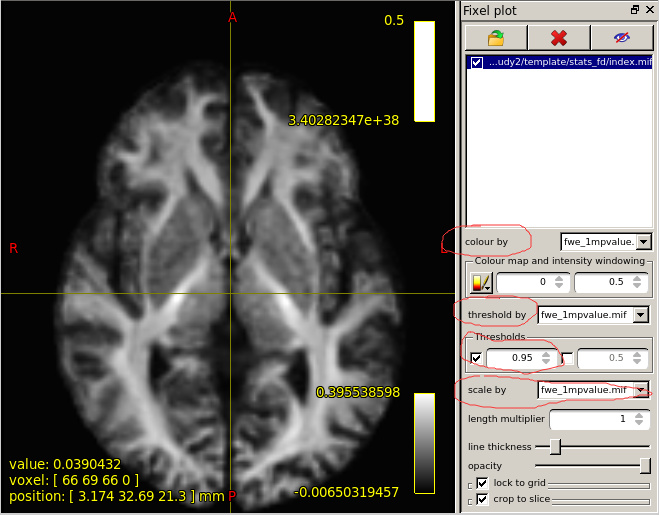 What’s more,I want to compare the 37 patients at each point in time, and I want to do a pairwise comparison (like,pre-therapy vs post-treatment,post-treatment vs 3 months later…6 conditions in total) so I am going to do the paired two-sample T-test 6 times.

So there’s a couple of points to raise from here. Neither of which are actually specific to your experiment, but given you’ve shown your setup I think it’s a good exemplar upon which to explain to a wider audience.

2.Do files with “Colour by”, “Thersholds” and “Scale by” boxes have to be the same?(Like image 2)

Definitely no. It’s very intentionally designed in this way. This is a strong benefit of the fixel directory format, as mrview immediately provides the drop-down list of files available for modulating the visual properties of each fixel.

Should the minimum threshold of 0.95 be set this way?(Like image 2)

Yes.Thank you for your patient and detailed answer.
Undoubtedly,I know how to set design matrix and contrast matrix when I want to achieve two-sample unpaired T-test.

Yes,what I want to do is:
1、Compared patients(pre-treatment vs controls) using two-sample unpaired T-test in fixel.Like this image(Page 7 in this article) 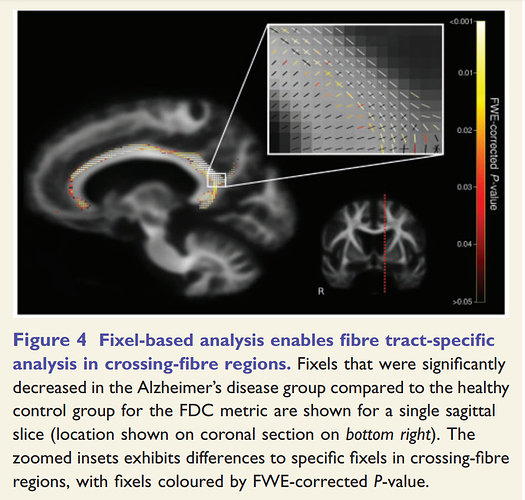 For the follow-up scans, it’s not quite so obvious. Based on your current experimental proposal, particularly since you stated that you were going to test 6 conditions in total, the hypotheses you would be testing are:

The six situations you listed are exactly what I want.At first,in order to check whether there is a significant difference between the pairings of the four time points,I want to do do a two-sample paired T-test for each of these six cases.
But When I see “Tripled” T-test,I wonder if there is “quadruple” T-test(Because I have data at four different times).If it does exit,What will its design_matrix and Contrast_matrix look like?(Take “5 subjects,each scanned under 4 conditions” as example) 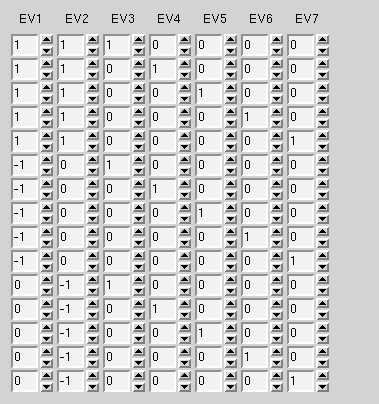 3、I have a problem(Same kind of problem) showing the FWE corrected P value and P value.When I show fwe_1mpvalue.mif on wmfod_template.mif,I know that these two are in the same range with the red coils as is shown in the first diagram below(I am not setting Threshold).When I set the minimum Threshold as 0.3(I know it should be 0.95 if I want see P value is less than 0.05),The range of colourbar displayed values has changed to a minimum of 0.66666687(as is shown in the second diagram below).I don’t know why this happened.AND,What range of values does the white coil represent? 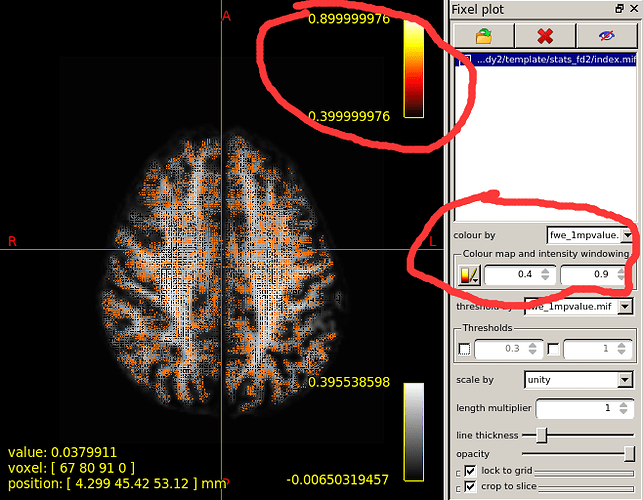 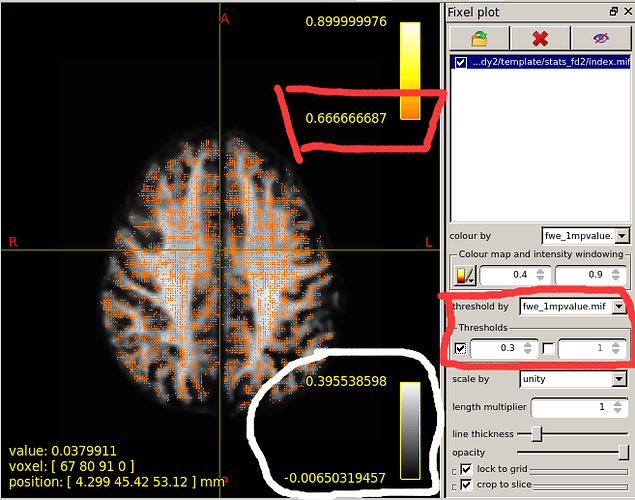 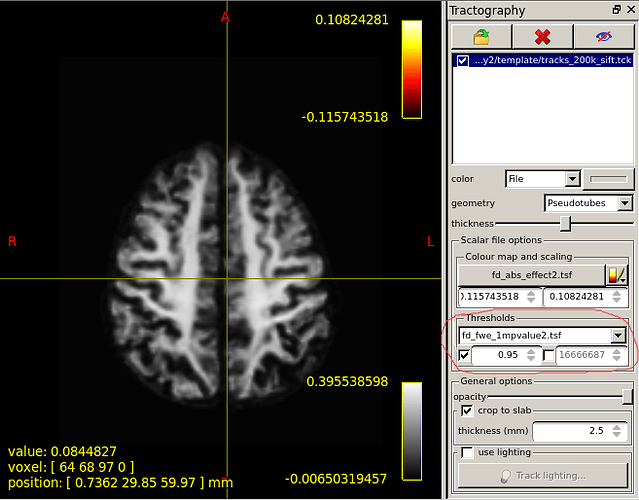 I encountered too many problems along the way

.Sorry for bothering you so many times.

But When I see “Tripled” T-test,I wonder if there is “quadruple” T-test(Because I have data at four different times).

Those instructions are specifically for FSL feat; for FSL randomize, to which fixelcfestats is more closely related, the page states that such a test is not possible in an integrated fashion. Even if it were, I think that compound symmetry would be violated in your case, since the variance between pre- & post-treatment is likely different to the variance between post-treatment and 3 month follow-up.

I’d need to search through the code to confirm, but I believe what’s happening here is that the manual lower colour value (0.4) is mapped to the start of the colour map (black in the case of the hot colourmap); but when the colour map overlay is drawn, it only shows the visible portion of the mapping. So if, in your p-value image, there are no fixels that possess a value in between 0.4 and 0.667, then once you engage the lower threshold of 0.4, mrview determines that there is no purpose in drawing the portion of the colour map in between 0.4 and 0.667 because there are no fixels present with those values, and so “zooms in” on a subset of the colour map for the purpose of the overlay.

What range of values does the white coil represent?

I’m hoping that in doing so, the command will have issued a warning that based on the sample size it was unable to achieve the default number of 5000 permutations, and would instead utilise all possible permutations. In your case, the maximum number of permutations is 2. Therefore the smallest p-value that can be mathematically obtained is 0.50.