I did a FBA following the step by step guide provided in the MRtrix3 documentation* with 9 athletes compared to 11 controls.

Everything worked out without any problem, fantastic job!

However, I am unsure how to proceed from step 23, especially which file I have to load in the fixel-plot tool to see significant results.

Running fixelcfestats with the -negative option I get the following output files:

I tried to load cfe.mif but don’t know with which file I have to threshold to display significant results and how to get the scaling right: 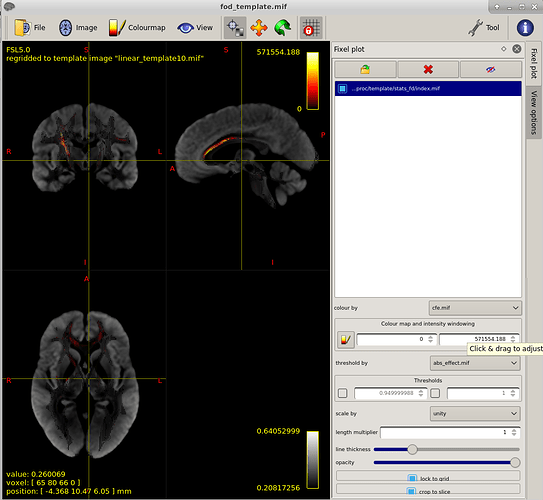 In short, I simply aim to get a similar output to that provided in this blog post under Fixel-based analysis.

Any help is greatly appreciated.

The image you’re looking for is fwe_pvalue.mif: This is the Family-Wise Error corrected p-value (well, actually the values in the image are of 1-p). So you want to load this image as the “threshold by” image, and setting the lower bound to 0.95 is equivalent to masking via p<0.05.

Any remaining fixels can then be coloured according to whatever contrast you want; cfe.mif contains the values resulting from the CFE statistical enhancement according to the equation presented in the paper, which may or may not be useful to you.

Thank you for the reply Rob!

Is there a possibility to use a different method to correct for multiple comparisons besides FWE and CFE, like for example FDR?

The command also provides uncorrected p-values (the fraction of permutations where the enhanced statistic was greater than that of the default permutation for just that fixel, rather than using the maximal enhanced statistic across the entire image to build the null distribution). I’m not sure that we would actively pursue implementing alternative multiple comparison correction mechanisms unless there’s a strong justification for doing so.

Hi! I ran some CFE analysis in order to compare FD,FC and FDC metrics between two groups and I’ve been struggling to understand the results. What file should I open in fixel plot ? What option should I choose in colour by and threshold by and what threshold should be applied?

The reason behind having the complex interface in the toolbars in mrview is that there is a wide range of ways in which you may choose to visualise your data, and hence you need the flexibility to choose what data you want to influence which visual property. If there was a single way in which the tool “should” be used, we’d just hard-wire it to do that.

For the most basic visualisation of the outcomes of statistical inference (i.e. see which fixels have p<0.05), you will want to open file “index.mif” in the Fixel tool (you can actually load any of the files in the fixel directory into the FIxel tool; but for the sake of simplicity, just load “index.mif”). Don’t even touch the “Colour by” control, just leave it as colouring fixels by direction. For “Thresholds”, you want to select file “fwe_pvalue.mif”. Under “Thresholds”, activate the checkbox on the left hand side, which activates a lower threshold, and put the value 0.95 into the value box alongside this. This results in any fixel for which the value in file “fwe_pvalue.mif” is less than 0.95 to not be drawn; as a result, only fixels with p<0.05 will be displayed.

From there, you can modify the display in any way you wish.