Half a brain lost after eddy?

Since dwifslpreproc calls FSL’s eddy to do its thing, I figured I’d ask here about it here as well, to get more perspectives on the issue.

I have been performing eddy on some scans I have. The subjects are animal brains scanned ex-vivo (therefore very little movement between volumes/directions) so I expect little changes after eddy (my supervisor told me that we don’t need to apply topup for these scans, but nonetheless we still have to apply eddy before FDT and getting DTI values for stats). So I performed eddy using only the mandatory inputs (bvals, bvecs, acqp, index, mask and dti data) and for most scans this worked fine. I haven’t used any additional option like repol or anything. Only the mandatory commands.

The masks were not prepared using bet, though. Since bet was giving me aberrant results (apparently bet works well for human brains on skulls, and I’m working with animal scans without skull, namely ferrets, sheep and mice), I opted for using select_dwi_vols to extract all volumes for b4000, average them using fslmaths and then thresholding using fslmaths -thr at a value that created a mask capturing the whole brain. As mentioned before, this apparently worked fine for most scans as I could see in their eddy_out files.

However on some scans I experienced loss of a substantial amount of data, even when the subject showed little to no movement in the acquisition. The only movement experienced during the acquisition I show here, for example, is a slow shift of the brain towards the left, on a total of 81 volumes, which the mask is a bit bigger towards the sides (see top image below). But the output is missing half the data (see bottom image below). How can this be prevented? 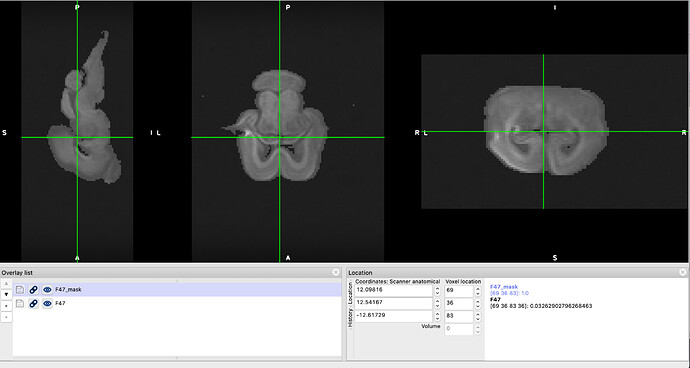 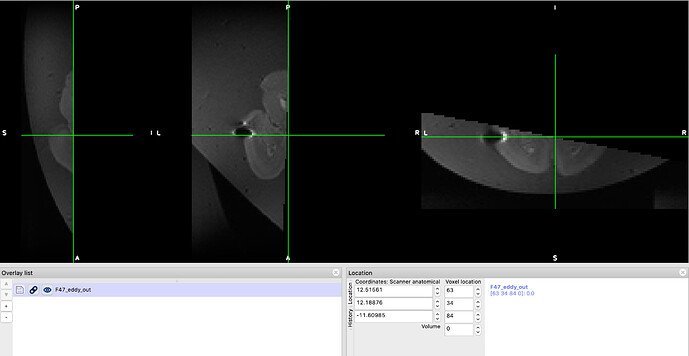 On other scans I lost a bit of data even when the subject experienced no movement during acquisition (brain embedded in agar). Could in this particular case be due to field inhomogeneities (that should have been corrected using topup even when my supervisor told me we could safely skip it)? How sensitive is eddy to these inhomogeneities? I’m asking because the loss of data in that case coincided with a region that is a bit dimmer than the rest of the scan. But to be honest that’s just an observation since I’m really not sure what is causing the issue, and I find it strage because in other cases I experienced no loss of data even when there were these differences in brightness in some regions. The acquisition protocol is exactly the same for animals from the same species, but the process has failed in only a handful. The eddy command is also the same for all of them (since I performed eddy in a HPC using a script with a loop).

Thanks for your help and insights!!

Not sure how much I can help here, but just something to look into to try to figure this out:

Thanks for your insights, J-Donald =)

I’ve enquired around and have been told that this issue persisted in eddy up until v6.0.3 but it has been solved in v6.0.4. The version that is available in the HPC is v6.0.3 so I have asked to have it updated. The issue is apparently that eddy had issues distinguishing subject motion from simple linear drift (which happened to this particular dataset). I’ll see if things improve after update and then come back to this problem if required.

If any of the relevant discussions have happened in public spaces online, please do throw some links up here, so that anyone encountering a similar problem who comes across this thread can follow the trail.

I’m currently being helped through the FSL Jiscmail list (people can follow the trail from this reply). So far, the only hint we had that the issue might stem from using eddy v 6.0.3 mistaking linear drift with true subject movement, and that issue was solved in v6.0.4, but the latter still gives me the same issues.

Currently Jesper Andersson is looking into one of my datasets that has this issue and will contact me hopefully soon enough. I’ll keep this space updated and linked to the relevant information =)

Just an update on this issue to wrap it up:

The issue was caused by “a complete failure of the alignment of the initial b0 volume to the diffusion weighted volumes” in this particular dataset, and also due to a small linear drift that cannot be resolved using eddy and will require linear registration against “itself”, so that all dwi volumes are aligned. Please see a more extended explanation of the issue here.

It was recommended that for some of these problematic datasets the dont_peas option of eddy might help resolving the issue cause by some unalignments of the b0 and the dwi volumes. Further discussion of when not/to apply eddy on some datasets and some implications related to this issue I found here are discussed here.

For people who want to read all the thread about this (which is not too long, but anyway), you can search the FSL JISCMAIL list archive in April 2021 under the subject “(EDIT) Half a scan lost after eddy”