How to generate the template for the FBA analysis of stroke and healthy control corhort?

(1) If the previous (single template for 2 groups) is better, how to mitigate the influence of white matter lesions on template generation, including warping DWI to template space and DWI metrics?

(3) To solve this problem, could I merely introduce the stroke lesion volume as a covariate to control the effect of stroke lesion if I use a single template for 2 groups?

P.S.: Here is a published FBA article of stroke patients (Natalia Egorova et al, Pervasive White Matter Fiber Degeneration in Ischemic Stroke, Stroke. 2020;51:00-00. DOI: 10.1161/STROKEAHA.119.028143). “A population template was generated using fiber orientation distribution images from 30 (15 stroke and 15 control) participants”.
That is to say, this study uses a single template generated for both patients and healthy controls. Is the method appropriate to generate a population template containing stroke patients? Will it be argued by reviewers (but this article using a single template for stroke patients and healthy controls has been already published in the famous journal Stroke)? 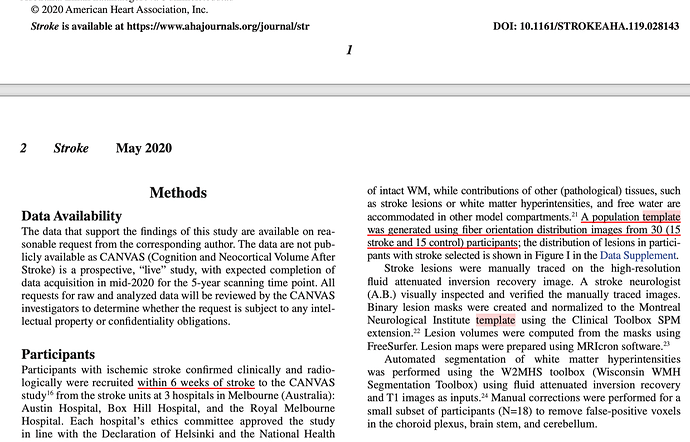 It’s difficult to know for certain exactly which approach is ideal in such scenarios, and it probably depends to some extent on the magnitude of the pathology. To understand the pros and cons of different approaches here requires appreciating the rationale behind the relevant building blocks of the pipeline.

what to do about lesions—there should be the opportunity to mask out lesions both during explicit mrregister calls, and if such masking needs to be performed within population_template. Some of this has changed with software version 3.0.0; @maxpietsch is the expert there. If you read the help description for the -mask_dir and -nanmask options of population_template ,

Thank you for your detailed explanation!

In my cohort, although the stroke lesions are obvious, they don’t distort the structure of their vicinity regions.

Therefore, I think I’ll try the -mask_dir and -nanmask options of population_template to mask the stroke lesion when generating the population template. It may provide the best effect, I suppose.

I will update feedback under this topic if I meet problems or get it totally through.