The purpose of this Wiki page is to explain how the software version information works in MRtrix3, and include details that may be used in response to frequent user questions.

As of the official production release of MRtrix3 in April 2020 (version 3.0.0), MRtrix3 now follows Semantic Versioning. This means that the naming convention of new updates will remain consistent. The basic structure is as follows:

As such, for scientific experiments that rely on consistency of software behaviour, one will generally want to not apply minor updates. For patch updates, users are encouraged to read in detail the changelogs that are prepared alongside each update. If there are no erroneous behaviours that may have affected one’s own experimentation, then such updates are safe to apply, and may result in greater stability in other areas. If however there has been erroneous behaviour identified and rectified in an update that may be relevant to your data, then re-processing of those data with the updated version is generally recommended.

Prior to the transition to Semantic Versioning, the software versions were as follows:

Note that while a tagged version “3.0_RC4” exists, this tag was generated for the purpose of testing release / deployment mechanisms, and is not intended for wider use.

The specific version of MRtrix3 that you have installed is reported at the very top-left of the inline help page:

Or alternatively you can request that information explicitly:

The specific software version to which the documentation corresponds can be both viewed and changed, as indicated in this screenshot: 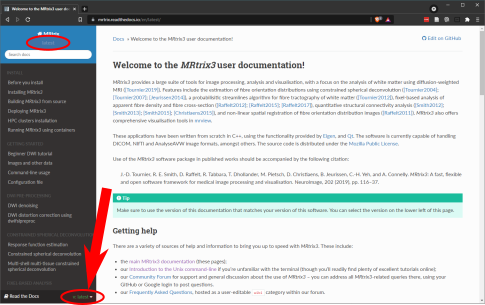