Hi. When opening a dMRI image in mrview, the colorbar displays a range which does not correspond to the min and max intensity range of the image. What are the two values referred to?
Moreover, which unit of measures do these values have?
I mean, when computing DTI or DKI measures, they will assume mm^2/s as unit of measure, but what about the starting dMRI image ?
please find attached an example of DKI spinal cord image for clarity 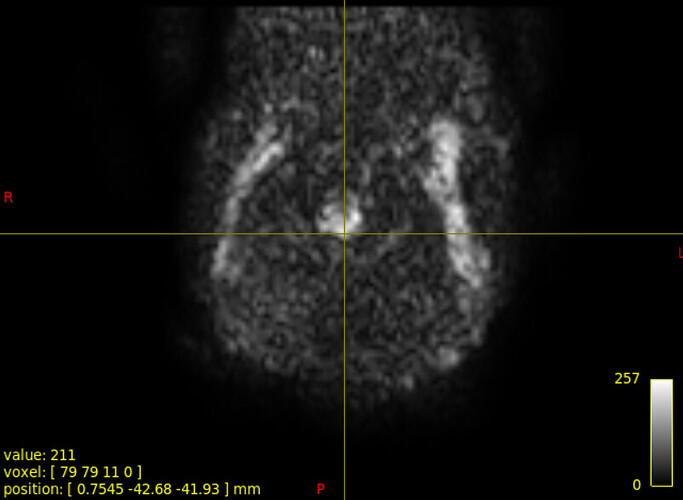 When you first open an image in mrview, with the default view being single slice, mrview scans just the first opened slice to determine its minimum and maximum values, and uses that to set the colour bar range. Hitting the Escape key at any time will repeat this calibration process for whichever slice is being viewed. This ensures that mrview opens as quickly as possible; if it instead scanned the entire image volume, it would open slowly every time. But any time that it can’t be guaranteed that only a single slice of the image can be shown (e.g. volume render, overlay tool), the minimum / maximum of the entire volume will be determined.

Moreover, which unit of measures do these values have?

Such data do not have “units”; on their own they are no more quantitative than e.g. the voxel intensities in a T1-weighted image. The values you get depend on the various reconstructions that happen on the scanner, and any any multiplicative factors applied before they are encoded into DICOM, where they are commonly constrained to the range 0-4095 and so ideally you don’t want bright features exceeding 4095 (and hence being clipped during the encoding process) or dark features being affected by discretisation artifacts due to using an integer datatype (e.g. “black” = 0, “dark” = 1, “grey” = 2, “light” = 3 does not an attractive image make).

The fact that these intensities can vary across participants due to reconstruction effects and not biological differences is why intensity normalisation is such a challenge for our pipelines. Unlike models such as DTI or DKI, where diffusion-weighted volumes are interpreted with respect to the b=0 image intensity in each voxel, the FOD amplitude is directly proportional to the DWI signal magnitude.