as I am trying to refine my workflow for delineating the Optic Radiation (OR), I am currently experimenting with different options. Initially I calculated Whole Brain Connectomes with 10 million streamlines for each subject and then extracted those connecting the thalamus to occipital regions + refining the result with Inclusion/Exclusion ROIs also used in other papers. Results looked promising, but were not accurate enough, as they could not to explain clinical results.

So my idea was to increase the streamline number to 100 million, which lead to much better representations, but also increased computation time dramatically.

Therefore, I did it the classic way, placing seed rois over the thalamus (extracted from Freesurfer Atlas as used above in connectome2tck) including the LGN and defining the same waypoints used before, in order to produce an adequate number of streamlines in a reasonable amount of time. The output seems to include the desired fibers of the OR, but also a lot of false positives or U Fibers, making it look very messy and hard to interpret.

What"s confusing me is that the output of the 100M Connectome extraction looks much cleaner than the one from tckgen; although I do not see a reason why the result would be differ this much as relevant seed regions (thalamus/gmwm_seedboundaries) should be fairly similar and inclusion/exclusion ROIs are identical.

So is there anything I can do to obatin clean results (like the OR extracted from 100M) in a reasonable amount of time? 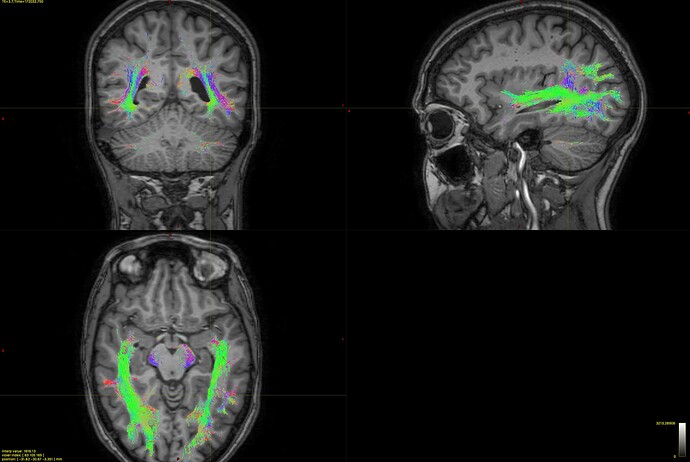 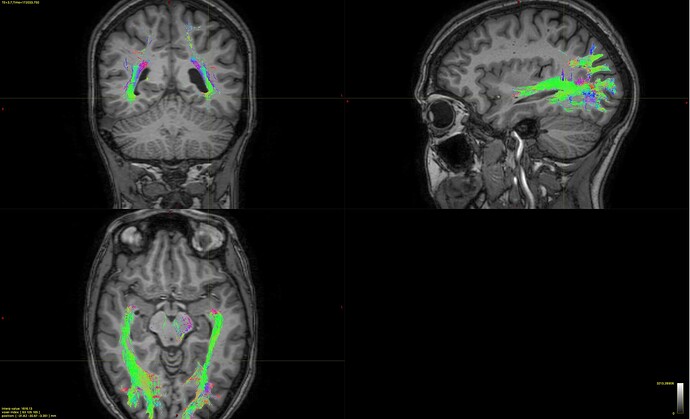 While one would think there would be some evidence out there regarding differences in outcomes between targeted tracking and editing of a whole-brain tractogram, I’m not having any prior conversations or manuscripts coming to mind that have done this with reasonable objectivity. The contrast between the two strategies is very frequently described from a theoretical perspective, but I’m not sure if it’s an experiment that has been evaluated in detail.

Sorry for a very late response but I’ve just seen this.

The OR is a particularly difficult thing to delineate (even, I’m told, invasively). My own experience is that the whole-brain approach would work in theory, but in practice is impossibly slow for this problem as so few streamlines from whole-brain tractography will delineate the OR with any real accuracy.

May I suggest having a read of my recent manuscript on this topic? A long run of published works now show that even targeted-but-simplistic approaches will get you a lot of the radiation, but with considerable variability and will commonly miss some or all of its anterior aspect. Simple approaches are also very inefficient, like you suggest, and there’s not a simple way to make this substantially faster + more reliably that I’ve come across, except to build something much more sophisticated.

and just to add: Rob’s comment about more-streamlines-appearing-more-messy is worth real consideration.

If you need to verify whether this is the case for you, the best way I have found is to convert your tractography into a trackmap, and divide that image by the number of streamlines. Then, voxel intensities reflect the proportion of streamlines passing that voxel, essentially controlling for streamline count.