I’m currently working on a project where I hope to look at tractography at different angular thresholds to better understand the connectivity of the insula. I’m following these instructions to generate the connectome: ISMRM tutorial - Structural connectome for Human Connectome Project (HCP) — MRtrix 3.0 documentation

and I was wondering if there was any way to get quantitative data to explain my findings? Other than looking at the connectivity and pointing out the similarities and differences between the tractographies done at different angles, I’m not sure how else I can explain my results. I’d ideally like some numerical data.

I don’t have numerical data for you, but I want to point out that the instructions you’re following (ISMRM tutorial - Structural connectome for Human Connectome Project (HCP) — MRtrix 3.0 documentation) are outdated. I don’t know of an official MRtrix page which is up-to-date, but you’re welcome to consult my scripts at GitHub - civier/HCP-dMRI-connectome: MRtrix scripts to generate dense weighted structural connectomes from the Human Connectome Project "minimally pre-processed" diffusion MRI data
Let me know if you have any questions.

All the best,
Oren

What you’ve got there is an exceptionally open-ended question!

Firstly, I’m going to commence by taking your text literally, in that you are interested in one specific grey matter structure. If your interest were instead in a specific white matter bundle, then my answer would be quite different.

In a similar vein, the other thing to consider is the dimensionality of such “numerical data”. I.e. Are you specifically looking for attributes that are scalar in nature, so that you can plot the value of that attribute as a function of tracking angular threshold? Or are other “forms” of data useful, as long as they somehow satisfy the criterion of being “quantitative”?

One way of conceptualising this task is to think about construction of a whole-brain structural connectome, based on a parcellation within which the insula is one node.
(This would actually be interrogating the influence of tracking angular threshold on the subset of whole-brain connectivity that connects the insula as opposed to its influence on targeted tractography, which depending on the measures involved, may differ slightly; but it’s nevertheless an option to consider)
This would give you the ability to:

There’s a huge scope of possibilities here, though many I’m foreseeing would require development of tailored commands, so I’ll try not to jump down the rabbit hole straight away.

What might help to make the question a bit more concrete would be if you could produce screenshots of results at two different tracking angle thresholds, and point out the “feature” that is different that you want to quantify in some way; that would help both yourself and others consider what solutions might be possible.

Thankyou so much for the ideas! What I ended up doing was looking at the connectome matrix and observing the number of streamlines connecting the insula to the amygdala. I did this with angular thresholds of 30, 60, and 120. What I found was that the number of streamlines actually decreased as I increased the angular thresholds. Is there an explanation for this? A conculsion I could draw from it? I was expecting the opposite to happen.

I’m attaching the connectome matrix screenshots which have the exact numbers. 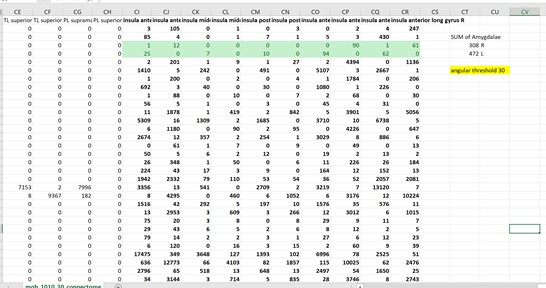 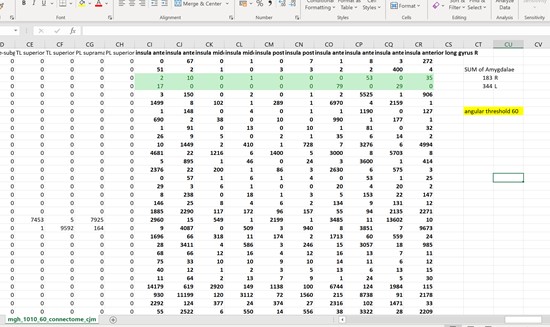 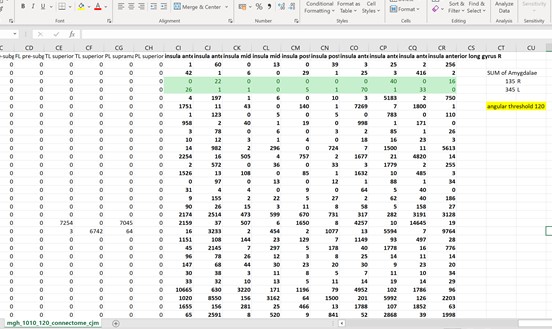