Hi I got some Siemens 7T DTI data (different protocols).
The sequence is based on a WIP (511).
The Siemens scanner automatically does some preprocessing, what they call DFC (dynamic field correction) and a basic tensor fit, which is obviously handy as it provides an online preview of the data including FAC maps, and it includes these results into the DICOM folder.

But when I trying to analyse the data using DWIFSLpreproc, the results were totally broken. I based the analysis on the “ORIG” data in the dicom source folder.
So I started to try and figure out why, so I also attempted different tools, such as the very basic FDT toolbox from FSL. To my surprise, FSL fared better than MRtrix. Still pretty bogged up, but better than MRtrix. Below I posted a screenshot of the FSL (left) estimate of FAC and MRtrix

Likewise I did no preprocessing on the FSL DTIFIT side.
I then discovered that when I do the exact same steps but instead of importing the “orig” data from but the “DFC” data, the result looked very good. 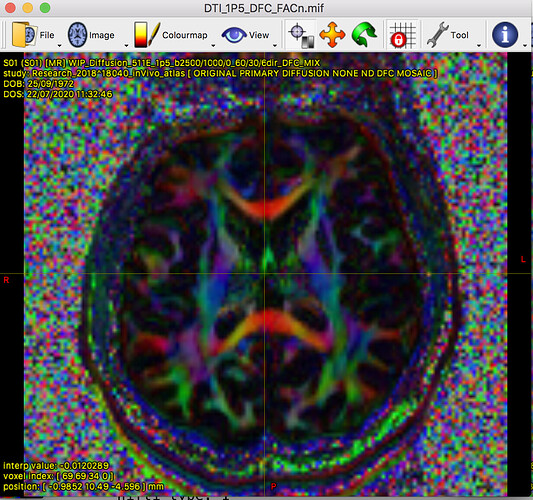 I then started comparing the ORIG data with the DFC data and noted while the changes to the data itself were minimal, the changes to the bvec was totally dramatic. I hence tried a hybrid dataset, where I took the images from the “ORIG” but combined it with the bvec from DFC, and ah and behold the results looked equally good. 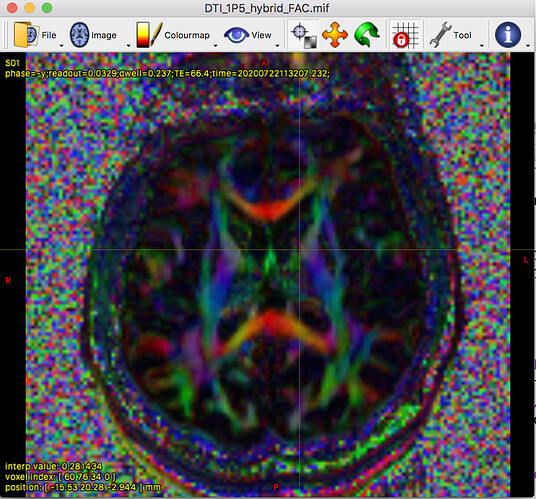 Anybody any comment on
a) what exactly DFC does
b) if it is better to continue using proper preprocessing based on the DFC data or the hybrid?

Thanks
Mark
P.S. A different DWI sequence protocol I used (RESOLVE) worked fine using the “ORIG” data, even using the super basic steps without any preprocessing.

If the contents of the diffusion gradient table in the DICOM headers varies drastically between the “orig” and DFC’d data, then I’d suggest that’s a major bug of which the WIP sequence developer needs to be made aware. But don’t say the word “bvec”, or they might (reasonably) think you’ve got a downstream software issue and it’s therefore not their problem.

The first hit my own searching got was this Siemens manual (for software version D13): 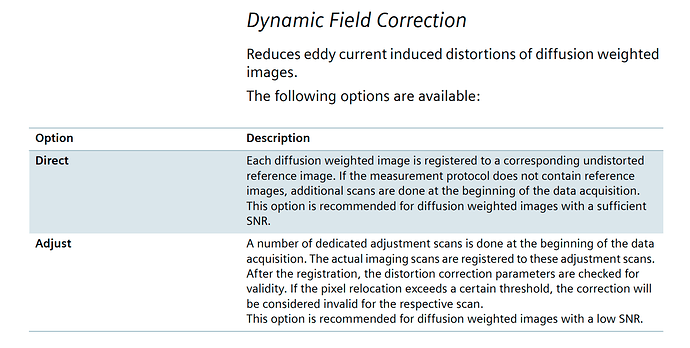 So this is an online vendor eddy substitute.

While this is likely preferable for the sake of QA at the console in terms of the clarity of e.g. FAC images, for more comprehensive image processing you would want to use the raw unprocessed images. I’d consider it unlikely that whatever algorithms Siemens have in place for eddy current correction are going to be superior to eddy. Indeed from their description it sounds more like the older eddy_correct, which is known to break down with higher b-value data, though it depends on what their “reference scans” are exactly. Moreover, its use would preclude application of dwidenoise or mrdegibbs, would possibly interfere with eddy's own eddy current distortion / subject motion estimation if using such, and would likely interfere with susceptibility distortion correction if applied (advantage of the topup / eddy combo is applying both corrections in a single step).

Hi Rob
So in summary, you suggest I should work with what I call hybrid, i.e. the orid data but overwriting the bvec with those from the DFC images.

Also, you suggest I talk to Siemens and tell them (politely) that they probably buggered the DICOM export function resulting in wrong FAC values. I guess attaching a DICOM from the orig set and the corresponding DFC set should convince them it’s not my mistake.

you suggest I should work with what I call hybrid, i.e. the orig data but overwriting the bvec with those from the DFC images.

Also, you suggest I talk to Siemens and tell them (politely) that they probably buggered the DICOM export function resulting in wrong FAC values.

FAC calculation with external software tools is too far downstream for Siemens to be interested. What you want to do is prove that within the DICOMs, the diffusion gradient table is vastly different between the original and DFC’d data despite the fact that it should differ only mildly at best, and the latter appears to be correct whereas the former appears to be corrupt.

You can actually show this in the raw data itself. The mrview ODF overlay tool permits not just viewing of FODs expressed in the spherical harmonic basis, but also ODFs that are expressed based on a set of pre-defined directions with the values in each image volume corresponding to function amplitudes along those directions (“dixels”, not to be confused with “fixels”). There are some ODF estimation methods that express their results in this way, but the raw DWI data are actually in this form as well. So you can load your raw DWI data as a “dixel ODF”, fix the scaling (as the default ODF display size is based on CSD outputs), select the b-value if your DWI data are multi-shell, and you should be able to see the DWI signal within each voxel as a glyph. Based on your FAC images, I’d expect you to see nice response-function-like shapes in single-fibre WM voxels in the DFC data, whereas the ORIG data will basically look like noise.

The FSL version of the FAC doesn’t look too bad (just not scaled by FA), so it might be a simpler glitch than we think. Can you post the output of mrinfo -dwgrad for both ORIG & DFC data? Might give us a hint as to what the difference is… I’m wondering if it might be similar to what’s going on in this thread…

Sure I posted the full outputs below.
Comparing them a little, the B0s seem fine but looking at the first image its
Orig:

I can’t see an immediate relationship, and the b-values look fine, too.
M.

FAC calculation with external software tools is too far downstream for Siemens to be interested. What you want to do is prove that within the DICOMs, the diffusion gradient table is vastly different between the original and DFC’d data despite the fact that it should differ only mildly at best, and the latter appears to be correct whereas the former appears to be corrupt.

Yes, I am aware of that. I intend to identify the DICOM images, ideally a single DICOM from the ORIG and one from the DFC_MIX and then point out that the diffusion table is different.

So when I use mrtrix dcminfo

I can’t see an immediate relationship, and the b-values look fine, too.

I’ve added the preformatted tags (the </> button) to your output, just to help legibility. It seems pretty clear the ORIG ones are completely messed up. All the vector components have the exact same values – the only thing that changes is their sign. This simply can’t be right… The DFC ones are much more in line with expectations.

Just need to figure out whether the DICOM data are themselves problematic, or whether our DICOM import is faulty…

So when I use mrtrix dcminfo

You’ll want to add the -all option as well. The -csa option only dumps out the Siemens proprietary CSA fields, which contain a lot of information, but not the b vectors in this instance (though you can see the full b-matrix, interestingly). As to which entry stores the information, it can be in various places. But it should be labelled kind of clearly as DiffusionDirection, SiemensDWDirection, or in the CSA parts as DiffusionGradientDirection.

Looking at the MatLab output, the relevant field is actually labelled Private_0019_100e, which is a Siemens private tag (not part of the standard), which is labelled in MRtrix as SiemensDWDirection. You should be able to see the full contents using e.g.

Or in Matlab by dumping out the contents of that Private_0019_100e field.

Ok, so it looks like their DICOM export is messed up, not our DICOM import. Thanks for confirming!

And I reported this back to Siemens and they seemed interested and are checking it.
Best
Mark