I’m using tcksift2 to perform an analysis aimed at individuating artifactual streamlines (false positive).
It is common sense to assume that artifactual streamlines follow either strange and jiggled path or incomplete path (they are truncated for some reason), and thus are usually characterized by high mean curvature due to the jiggling, or low length. For this reason I investigated wether there is a correlation (as expected) between length and curvature with respect to the weight factor returned by SIFT2: high curvature -> low weight ; low length -> low weight . 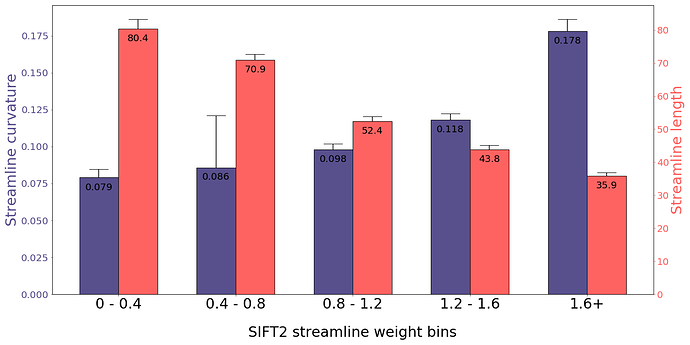 Do you guys have any comments or justification to this?

Always love an introduction that starts with my methods producing unexpected results!

I’ll start with length, since explaining the curvature probably depends on understanding the length effect.

While I don’t think I’ve demonstrated anything in this regard specifically with SIFT2, you could infer that this is the result that you would get based on Figure 7 in this manuscript. There, I show that SIFT tends to retain short streamlines and remove long streamlines. SIFT2 is simply a more continuous version of that effect.

(Indeed one way of conceptualising SIFT is that it assigns a weight of 0 to “removed” streamlines, and some fixed weight > 1.0 to all “retained” streamlines)

The deep white matter pathways, where the FODs are less complex and there is no partial volume with grey matter, and a large volume in which to seed in the case of homogeneous streamline seeding, tends to make those deeper long-range connections “easier” to track, and therefore over-represented in an unfiltered tractogram. The short-range superficial pathways near the cortex often result in streamline reconstruction failure (even with ACT’s back-tracking), and so end up under-represented in the unfiltered tractogram. SIFT2 is compensating for that effect as I would expect it would. In fact as I type this I’m wondering if 3.0.0's reduction of the default FOD amplitude threshold during tractography might reduce this effect, as there should be less premature streamline terminations in the superficial white matter…

The story for curvature is a little more complicated. There’s potentially a few things going on there.

For a definitive answer, you would need to include the details of precisely how mean curvature is being calculated:

In general though, I don’t see any particular reason why streamline curvature would have a direct influence on SIFT2 weights, given how the relevant calculations are done. I suspect more likely what’s going on is:

I reckon if you were to use the vectorstats command to test the hypothesis of a non-zero correlation between SIFT2 weight and streamline curvature, but removed the effect of streamline length using the Freedman-Lane method, the null hypothesis would not be rejected.