I’m trying to combine two DTI scans acquired sequentially from the same participant. The main aim of doing this is to get a larger FOV and perform fibre tracking simply on the combined image. These two scans overlap by ~ 2-3 cm, and are acquired with different orientations and b vectors 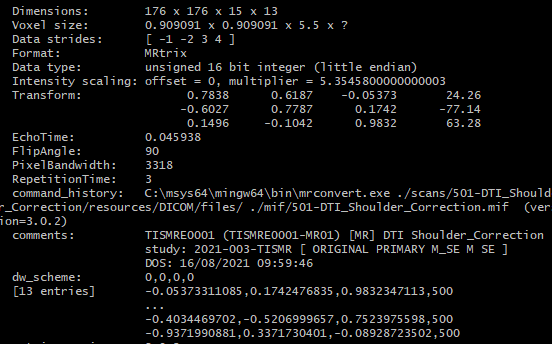 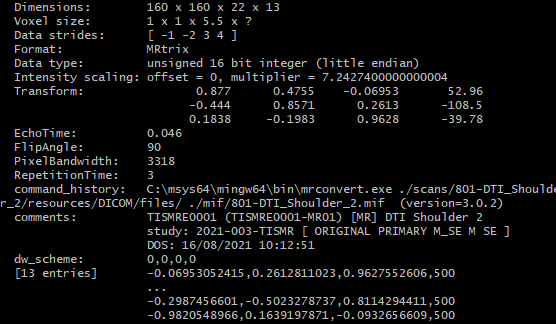 I’m having trouble finding commands in MRtrix suitable for this purpose. My current workflow still relies on a combination of MRtrix and Matlab, which typically follows the procedures:

However, the combined DTI image is either having two regions with different intensities, or only one of the scans is contained in the combined image while the other one is missing. Also, despite the difference between b vectors of two scans are minor, I’m not sure if this is going to affect the results a lot.

I’m wondering if there is a way to perform such scan combination properly, correcting the intensities of two scans and without bringing errors in b vectors along the way?

Thank you so much in advance!

The main aim of doing this is to get a larger FOV and perform fibre tracking simply on the combined image.

I love your use of the word “simply” here

This is a highly non-standard use of DWI data, and so is going to require a substantial amount of tailored coding and/or creativity…

My ideal preferred solution to this sort of problem would be:

This would however necessitate that all processing steps be robust to the presence of non-finite values in a subset of volumes, which is not a trivial thing to implement or test. So let’s consider instead an approach that wouldn’t involve such.

What you’re looking for, eventually, is a single image with 13 volumes and corresponding diffusion gradient table. Now the first issue, as you’ve noted, is that the gradient tables are not identical, though they are close. You may choose to just swallow that imprecision, maybe generating directions that are the mean of the diffusion directions between the two series to store in the combined image but not actually modify the image intensities in any way. There is an alternative solution, but it may be overkill:

This may not be great in this instance given that you would be limited to lmax=2; though your b-value is only 500.

For estimating and correcting for differences in intensity scaling between the two scans, IMO you can only depend on the region of overlap; you can’t use the rest of the images given they differ in anatomical content. For this I’d suggest mrhistmatch scale, operating on the b=0 data (assuming you have such), masking both images to just the region of overlap.

Once you’ve done this, it’s a matter of determining the appropriate mathematical operations to perform in order to produce your desired data: average the two in the overlapping region, inserting data from one image or the other where one of the two images is filled with NaNs. This could be done in either Matlab or using MRtrix3 commands, but should not be overly difficult in either case. Alternatively you could fill regions outside the FoV with zeroes instead of NaNs, sum the two series, and then multiply that by an image that contains 0.5 in the overlapping region and 1.0 everywhere else. There’s multiple solutions here.