Hello,
I have acquired some neonatal subjects with a diffusion sequence made up of 6 b=0, 13 b=700 and 13 b=2100 s/mm2. I have used gen_scheme command in order to obtain uniform sampling of the q-space sphere. I would like to know if its coverage is spheric or hemi-spheric. This is the figure I obtain. 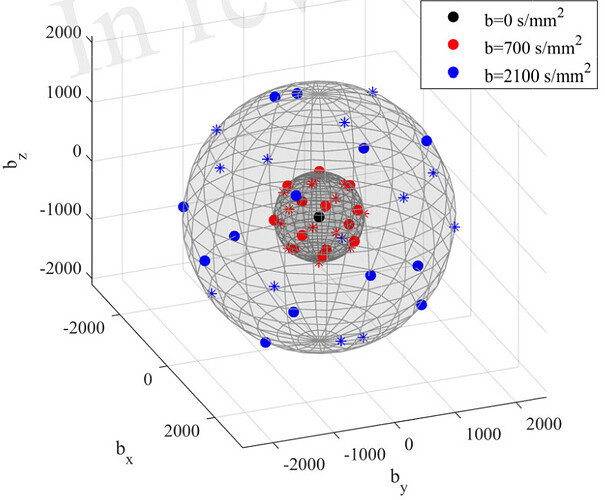 Looks like it’s spherical. You can use dirstat on the produced table to test for asymmetry.

As an aside, I’m trying to plot that very sort image on some data of my own. How’d you generate it?

Hi.
Thank you.
Here is the code I used.

Thank you. I am trying to use this function in order to understand the coverage of the unit sphere in my case. However, the following error occurs: " File “hemi.py”, line 17, in
is_hemispherical(bvecs)
File “/home/rosella/anaconda3/lib/python3.7/site-packages/dipy/core/geometry.py”, line 1056, in is_hemispherical
raise ValueError(“Input vectors must be unit vectors”)
ValueError: Input vectors must be unit vectors"

First off, if you’ve used our gen_scheme script to produce this DW encoding, you should end up with a scheme that is entirely appropriate in terms of its coverage. The only thing I would note however is that 13 DW directions at b=2100s/mm² seems far too few to properly sample the signal (assuming this is to be used for human in-vivo brain imaging). I would recommend a minimum of ~30 directions for that shell (preferably more than 50 or so for adult brain imaging).

Coming back to your original question however, I think there’s a lot of scope for misinterpretation here, so if you don’t mind, I’ll go over everything from my point of view – with my apologies if you already know all of this…

For the DW signal, we can safely assume antipodal symmetry, and hence any measurement along a given direction û is considered equivalent to a measurement in the opposite direction -û. In your plot, the blue dots are the actual directions recorded, the stars are their opposite counterparts; displaying both gives you a better idea of the actual coverage of the DW signal.

The way these schemes are typically optimised is via a bipolar electrostatic repulsion model: if we imagine each DW direction is represented by a stick through the origin with electric charges at either end, the aim is to find a configuration that places all these charges as far apart from each other as possible. Once we’ve done that, we can chose which end of each stick to use as our final direction – it doesn’t matter which as far as the DW signal is concerned, as the DW signal is symmetric and both orientations are equivalent. Note that this means we can pick all of the directions from the top hemisphere if we want to – and indeed you’ll find plenty of direction sets in common use that have done precisely this. But as far the sampling of the DW signal is concerned, this makes no difference (in theory).

Where the choice of polarity does matter however, is in the manifestation of artefacts such as eddy-current distortions: the opposite direction implies the opposite gradients, and this will lead to the opposite eddy-currents being induced, and hence the opposite distortions. When correcting for these distortions, this could mean that we end up with data with residual distortion relative to some undistorted external reference, because on average, the distortions in the DW data all tended to go one way. The FSL EDDY page has a good illustration of this. To avoid these kinds of biases, the recommendation is to make sure the directions do cover the full sphere relatively uniformly.

The way the gen_scheme script handles this is to first obtain an optimal distribution for DW signal sampling using a bipolar electrostatic model, and then pick polarities for these directions that maximise spherical coverage (via an unipolar electrostatic repulsion model). Because we’re using the original directions from the first stage and only changing their polarity, the uniformity of the DW sampling is unaffected by the second stage – but biases due to non-spherical coverage of the sampling are vastly minimised. Note that there’s no guarantee that they would be eliminated entirely, since that would entail changing the directions themselves, not just their polarity – and that would compromise the uniformity of the sampling of the DW signal, which in my opinion is by far the most important aspect. Others may have different opinions as to how best to balance these two considerations.

This can all be assessed using the dirstat command. Here’s an example output from the dHCP, and I’ll try to explain what everything means below:

Here we have 4 sections, one for each shell in the DW scheme, sorted by b-value, and showing the number of DW directions in that shell. If you look at the last shell (b=2600s/mm²) for example, you’ll find:

OK, that’s probably already too much information, but hopefully your original question will have been answered somewhere in there…

Looks like mrtrix has you pretty well covered, and this is, after all, the mrtrix forum, so I will not follow up with DIPY support here. But if you do end up needing help with this DIPY function, please don’t hesitate to contact us through one of these channels: DIPY - Support

Hi,
I think your answer has widely solved my questions. Thank you very much

all the best,
Rosella