I’m generating FODs for tractography using the msmt CSD algorithm. The majority of my subjects (~100) went through the processing fine except for 6, who had sphere-looking white matter FODs with extremely small intensity values (please see figure below, and note the scale of FOD display). I’ve checked the dwi images, the response functions of each compartment, the 5tt volume and brain mask, but couldn’t spot any potential errors. 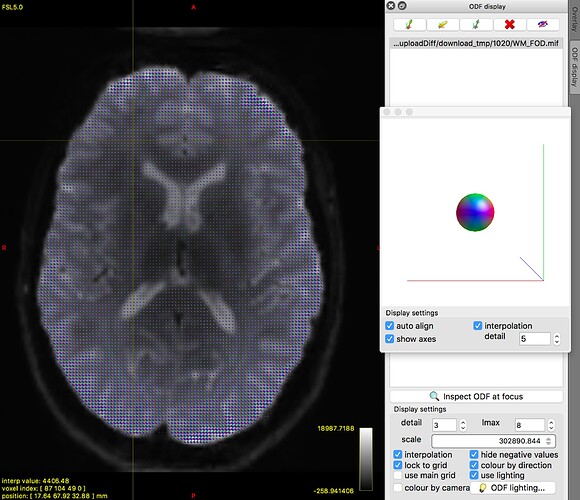 Our b values are 800 1000 1500 2000 and 3000. There are admittedly some spurious values in the dwi image after eddy processing but they are excluded by the brain mask. I’ve been stuck on these 6 subjects for so long, please advise on what I can try to debug this.

Thank you very much!
Veronica

Unfortunately there’s not a whole lot I can propose over and above the generic “check your data at each step”, which you’ve already got some sense of. But maybe obliging you to reproduce all of those data here on the forum might isolate the issue? So for instance, you could take two exemplar participants, one working and one not, and provide for us here:

Thank you so much for the quick reply and I was able to spot the problem using mrstats! Turns out there are a couple of voxels with extreme negative values that are indeed included in the mask area and I just didn’t notice… This is the first time for me to use mrstats and it’s so handy in checking the volumes!

Is it best practice to threshold the dwi images before processing, say to a range of [0,20000]?

Is it best practice to threshold the dwi images before processing, say to a range of [0,20000]?

Some pipelines will clamp DWI intensities at zero following basic pre-processing. Even zero values can be an issue though; e.g. you can’t fit an ADC exponential decay curve to something with a zero intercept. It’s potentially worth seeing where negative values arise and identifying the source, in case it’s indicative of some other problem; but certainly if they are extreme negative values you won’t have much choice but to clamp or mask them out.

You certainly wouldn’t want to clamp maximal values. That would be wholly artificial, and could vary considerably in effect across different subjects. rather than clamping, there can be the question of intensity normalising so that the “overall magnitude” of image values is comparable across subjects; this is what dwinormalise group does directly on the DWI data (mtnormalise seeks to achieve the same effect, but it does it in a sort of indirect way after the deconvolution step rather than modulating the DWIs themselves, which can take a moment to wrap your head around).