I have general questions, I’m looking for advises regarding the following strategies. I’m not working with ODF so I’m wondering how the general strategies depicted in the forum can be applied on my data. I wish to disclaim that I’m a beginner in such processing.

Please find below some figures, I have 3 objectives :

Strategies 1 (done except the parcellation):

Strategies 2 (done except the parcellation):

Please find below some questions:

Thanks in advance for your help.
Valéry

Data for each subject in template space: 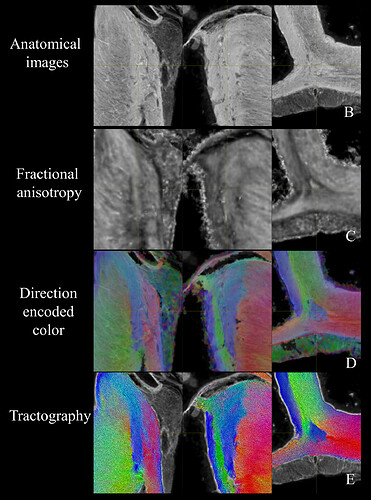 Your intended analysis is very much non-standard, so there’s a wide scope of possibilities for what could potentially be done and to what extent things could be made automated / objective rather than manual / subjective. Before getting to your questions, this sticks out to me:

Is your intention to implement / utilise some form of automated parcellation algorithm for deriving such in a data-driven way? The answer to that question quite drastically changes the scope of the project. It bears some limited resemblance to some work I did during my PhD, which we could discuss if you plan to go that far; but if you’re purely generating the requisite data in order to perform a manual segmentation upon such, then nevermind.

A potential disadvantage with this sort of approach—which I know to have been a concern with some rather influential manuscripts in the past—is that despite the inter-subject variance in the tensor estimates across subjects once warped to template space, a single group average tensor is produced per voxel, and then a single discrete fibre orientation is extracted per voxel, and then all streamlines traversing that voxel select only that exact orientation to follow. So the tractography outcomes will look exceptionally “clean” and “sharp”, but this runs the risk of being quite misleading. Particularly anywhere where the tensor model is inadequate, and you could even have tensors from different subjects pointing in very different directions, tracking on just the principal eigenvector of just the group average tensor will completely mask that ambiguity. That’s not to say it can’t / shouldn’t be done, it’s just worth bearing in mind when interpreting such streamlines data that its high precision may completely mislead you regarding its accuracy. For instance, you could end up with a very sharp and well-defined structure in template space that is not actually a very good representation of anything that appears in any individual subject.

This will “work”; but you’ll undoubtedly find that the definition of structures of interest is not as sharp. Indeed it might actually look quite unusual having deterministic streamlines from subject spaces all warped to template space, where there will be “batches” of deterministic streamlines following one another perfectly yet many such batches with different orientations…

Is there any strong reason for:

I’m not working with ODF so I’m wondering how the general strategies depicted in the forum can be applied on my data.

? You could warp individual subject FOD data into a common FOD template, and then perform tractography on that just as we do for CFE / FBA.

First, I would like to thank you a lot for this really helpful answer. It was really pleasant to read and help me a lot and confirm many observations. Please find below the answer to the discussion.

Thanks a lot,
Valéry