I have an DWI b0 image and a T1 image in NIFTI format that are already coregistered together. But after I converted them to .mif they became not aligned anymore (see the screenshot). This only happens when the T1 image is acquired with saggittal orientation, and the T1 image was converted to NIFTI and rotated with MRICron. I also tried using the -strides 3,-1,-2 option as suggested in the Documentation but it didn’t make any difference… Has anyone encountered this with saggittal images? 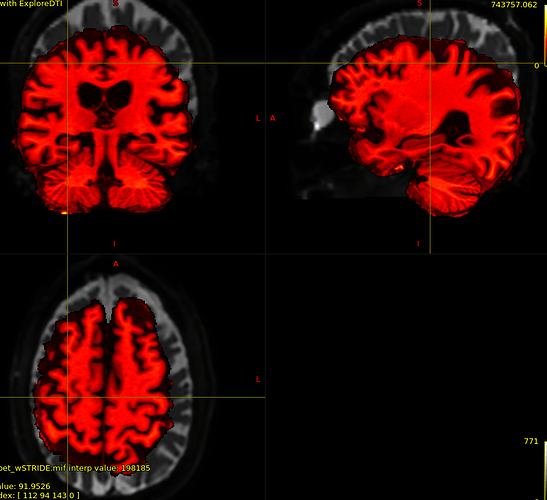 Does the MRICron-generated NIFTI look as expected in mrview? (see Overlapped ROIs image and diffusion images)

Assuming a negative answer, I’d guess the issue is that the sform and qform convention in MRICron is different from what we use (see: NIfTI transform ambiguity). You could instruct MRtrix to ignore the qform via the config file option NIfTIUseSform or command-specific via command-line option -config NiftiUsesSform 1 to see if that resolves the issue.

Thanks for responding! I just got around to try this…
So it turns out it’s not really an MRtrix3 issue. Somehow the two images have different sform and qform despite having been co-registered together and having the same shape. It doesn’t turn out to be an issue for other things I use like FSL, but it does matter for MRtrix3. NIfTIUseSform option doesn’t make any difference, I think it may be because sform is also different. But thanks for reminding me to check the header info.