First of all, I am sorry for the lengthy question and I am a newbie Tractography analysis. In addition, I have read previous posts about generating streamlines from ROI to ROI. The purpose of my analysis is to perform a seed-based tractography from source ROI to other regions of shen atlas, I have tried two different methods but I am not sure if they are corrected.

You cannot apply the model underlying SIFT to the output of a targeted tracking experiment; it can only be applied to a tractogram that includes the reconstruction of all plausible pathways. In retrospect I failed to adequately assert this in the corresponding manuscripts…

E.g. Consider a voxel where just one streamline from your targeted tracking experiment traverses, but if you were to do whole-brain tractography, you could see that that voxel is predominantly traversed by other white matter pathways. If you were to apply the model underlying SIFT to just the targeted tracking reconstruction, it would attribute all of the fibre density in that voxel to the pathway of interest, which is clearly not reflective of the underlying reality.

If you are interested only in the connectivity between node 146 and every other node in the parcellation, why not just manually extract line 146 from the full (symmetric) connectivity matrix, and completely omit steps 4 and 5? It seems to me that step 3 already generates the data you want, and steps 4 and 5 are a very convoluted way of trying to access the specific subset of connection strengths in which you are interested.

It seems that the problem of method_01 is using sift to seed-based tractography, am I right?
I was doing a similar research to generate tracks seeded from VTA to whole GM, thus can get a connection map of GM for VTA.
Is there any problem with this pipeline：

Correct: SIFT is fundamentally not applicable to seed-based tractography, only to whole-brain tractography. I’m hoping that my (updated) preprint adequately explains why this is the case (this is one of many threads on this forum that motivated writing it).

I was doing a similar research to generate tracks seeded from VTA to whole GM, thus can get a connection map of GM for VTA. … Is there any problem with this pipeline?

What you’re doing there seems to be fundamentally different to the original question in this topic. The original question related to wanting to quantify connection strength from one region to others, which is the context in which SIFT2 is applicable. In your case, you’re simply generating an image of the density of streamlines terminations, where the streamlines were seeded from a specific region. There’s nothing intrinsically wrong with this, as long as the result is interpreted in accordance with the way in which they were generated. However if you are aiming for these to have an alternative quantitative interpretation to that I just described, then you would need to go about the experiment in a different way:

Obviously both of these have caveats. Unfortunately I’ve on multiple occasions seen people start talking cross-purposes because each did not realise that the other party was implicitly applying the converse interpretation to “probabilistic streamlines”. But I thought I’d elucidate here given there’s a reasonable chance that it’s related to your uncertainty here, and my publication where I explain this is still not out yet so I couldn’t just refer you to it…

Thanks again for your reply!

I was using the HCP data to process this seed-based tractography, could you please recommend the parameters for -select and -seeds (or -seed_random_per_voxel image num_per_voxel)? 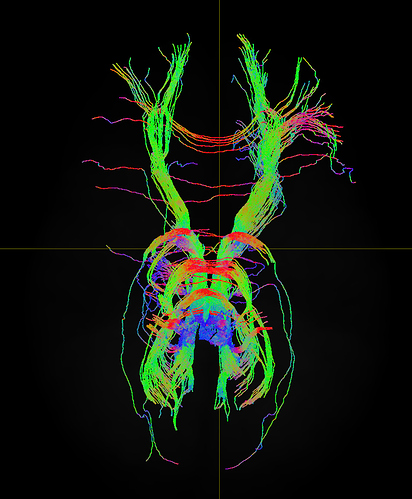 could you please recommend the parameters for -select and -seeds (or -seed_random_per_voxel image num_per_voxel)?

In the absence of using the -select or -seeds option, it will generate a maximum of 5,000 streamlines, from a maximum of 5,000,000 seed points (the latter of which is basically irrelevant in the absence of inclusion / exclusion regions, but it’s there to prevent tckgen from running forever in cases where it’s almost impossible to generate streamlines given the criteria imposed).

In terms of what is an “appropriate” number of streamlines, I’ve tried to express my point in as generalised a way as possible in a few different threads, but it warrants reiteration. The basic premise is that if you re-perform the tractography experiment, and the “outcome of the experiment” changes “to an unacceptable degree” due to the stochastic nature of probabilistic streamlines tractography, then too few streamlines were generated. The questions then are: what is the “outcome of your experiment”? What is an “acceptable degree” of variability? The former depends entirely on the context of what you are deriving from the streamlines data. The latter is somewhat subjective, but fundamentally there’s a certain minimum amount of variability across participants that could be achieved even with an infinite number of streamlines, and with a finite number of streamlines that variability will be larger, but you don’t want it to become so much larger that you become insensitive to the effects you’re trying to observe.

For the seeding mechanism, for sufficiently large numbers there won’t be any observable difference between the three mechanisms you listed. They’re there for feature completeness and to be able to reproduce the experiments of others, and they do operate in different ways, but your streamline trajectories won’t drastically change because of differences in the esoteric ways in which streamline seeds are determined within a pre-defined mask.